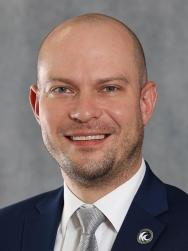 Dr. Matthew Borcherding was named Interim Vice President of Academic Affairs and Dean for the School of Science and Mathematics in July 2022. In this role, Borcherding leads all five academic schools within the college, with a focus on growth and development of the academic offerings across the college.

Borcherding has served as a dean since December 2016 and was a biology faculty member on the Fergus Falls campus from 2011 to 2016. He has also served as an adjunct professor of higher education at a regional university and served on several dissertation committees in that capacity.

Borcherding has written and presented both regionally and nationally on the topic of central nervous system depressants on academic and social involvement in undergraduate students.