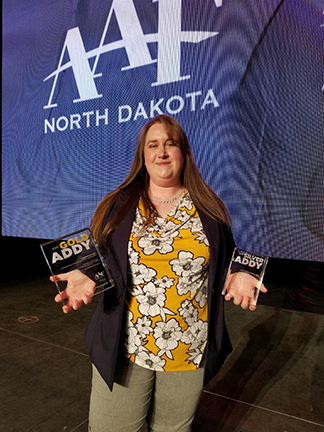 Smith-Savage, of Fargo, won a gold award in the Brand Campaign category and a silver award in the category of Out of Home Ambient Media for a poster she developed for a zoo. The brand campaign – which included a logo, color scheme, website and all the brand’s marketing materials – was for a gourmet trail meal company called Nomahnd, which was inspired by her love of camping.

The AAF student awards were announced Feb. 28 at the organization’s annual Fargo gathering of advertising industry professionals. Both of her winning entries will advance to the district-level competition in late March.

Smith-Savage, a student in the Graphic Design diploma program on M State’s Moorhead campus, will graduate in May.